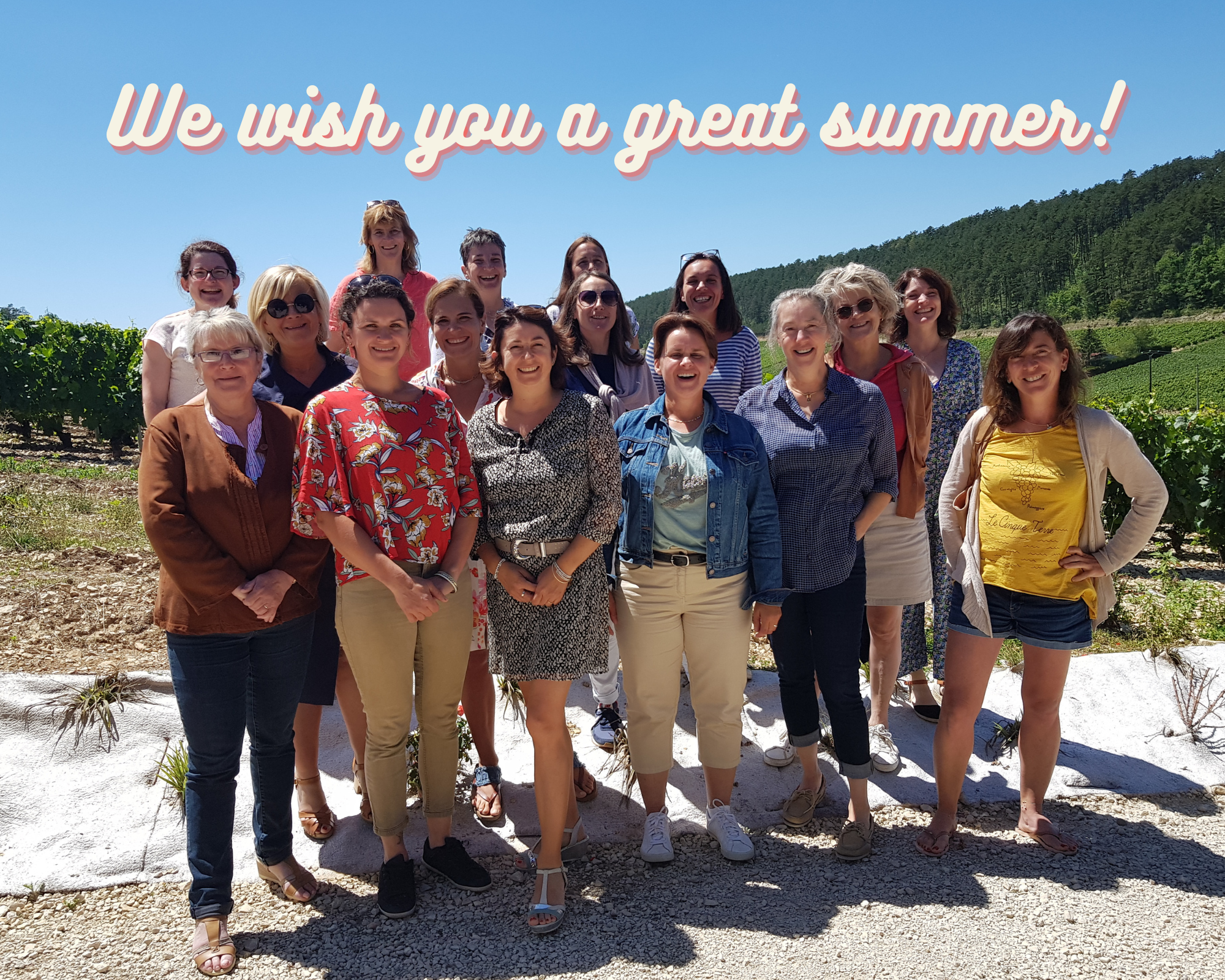 The last 2 years have been really difficult and the successive confinements have disrupted our lives, both professional and personal.
2022 is coming with a burst of hope and positivity.
And I just hope that, even if the road still seems a bit long, this year 2022 will finally see the end of the tunnel.
In the meantime, let's stay united and cautious.

Drink, Let's drink to all the opportunities to drink in 2022 and know, let's take advantage of all the moments of joy and sharing, so precious, now that we all know their importance.
We will try to keep some nice surprises in store for you in 2022 and we look forward to inviting you there with us. Because the Women (and Wines) of Burgundy will know, as always, how to share their passion with you and make you discover their beautiful bottles full of emotion...

I sincerely wish you and your loved ones all the best, only better,

Unbelievable, beyond imagination, improbable and even unthinkable - a few words which best describe for us winegrowers the year 2021 : in fact, who would have thought at the beginning of the year that we were to experience such climatic conditions which were to severely affect the vine’s growth cycle through to the harvest ?

All started end March/early April with excessively hot conditions – as high as 27°C - and an explosion of vegetation growth and consequently early budding on the Chardonnay and Pinot Noir vines most exposed ; this was followed by forecasts warning of the risk of nightime frost, unthinkable at the time but confirmed during the nights of 6 and 8 April and the return of wintery conditions with some snow and temperatures of minus 7/8°C.

As a result and in spite of all the measures taken to counter the effects of these harsh winter conditions, there was serious frost damage to the buds and furthermore, the cold spell lasted until the end of April.

The damage was assessed as very high and the vine recovered with a lot of difficulty, particularly as the month of May was cool with little sunshine.

In June, the contrast was spectacular with hot and sunny weather and erratic growth of the vine : by mid-June the vine had bloomed too fast and too early causing shatter and thus additional risks of loss in yield.

Rainfall in June and July was more or less high depending on the area with risks of mildew and oidium and special care had to be taken to keep the vine healthy including precise planning for phytosanitary action.

The weather in August was mainly dry ; the nights were cool for the season with risks of oidium particularly as the veraison development stage was late and did not start to show until the tenth day of the month but was in fact completed during the end of the month with the good seasonal weather conditions.

The degree of maturity varied considerably depending on how much the vines were hit by frost so it was necessary to monitor regularly the development and the sanitary condition of the grapes in order to fix the harvesting dates.

Harvesting started in Burgundy around 8 September for the Crémant wines and approx. 17/20 September for still wines ; great care had to be taken when sorting, particularly for the red wine grapes to ensure impeccable quality wines, fresh, fruity and elegant.

The 2021 vintage white wines can be qualified by their nature as well balanced with good intensity and aromatic potential.

Nature is beautiful : she can also be cruel but whatever the case will always have the last word.
This lesson was learnt the hard way just recently in Burgundy and in fact, almost the entire French wineland, when a historically severe frost occurred for 3 nights.
At this point in time, early May, it is impossible to assess with accuracy the extent of the damage which many say will only really be evaluated during the grape harvest. ; not a satisfactory situation for journalists in a hurry, like us, but the only sensible attitude to take.
It must be said however, that among winegrowers and others concerned, questions are being raised : for instance , after each period of drought or frost there is an open debate on the subject of
vine species able to be harvested later in the year or those species of old and long forgotten, resisting better to hot conditions. Winegrowers have always been able to benefit from research and trials to develop their techniques and skill all to their advantage and ultimately, to the satisfaction of their customers.
Of course, the vine is not like a cereal planted each year – the vine must live for 40, 50 ,60 years or more and when it is planted nobody has the faintest idea what the climatic conditions will be in 2061 or 2071 ! Predictions have been made and some, paradoxically, claiming that global warming will continue to rise but in our part of the world this could result in a temporary period of cooler conditions depending on the effects of the Gulf Stream. This leads to the question, how can we entirely rethink the entire winegrowing complex such that it can survive in extreme heat and yet be able to resist severe cold conditions ?
Nature is indeed both beautiful and cruel so it is going to be vital to find new ideas for the cellar and in the field, patiently and steadily, with a long term approach, just as in fact has always been done in Burgundy for centuries : it has had to face up to other situations in the past…..